When was the stairlift invented? 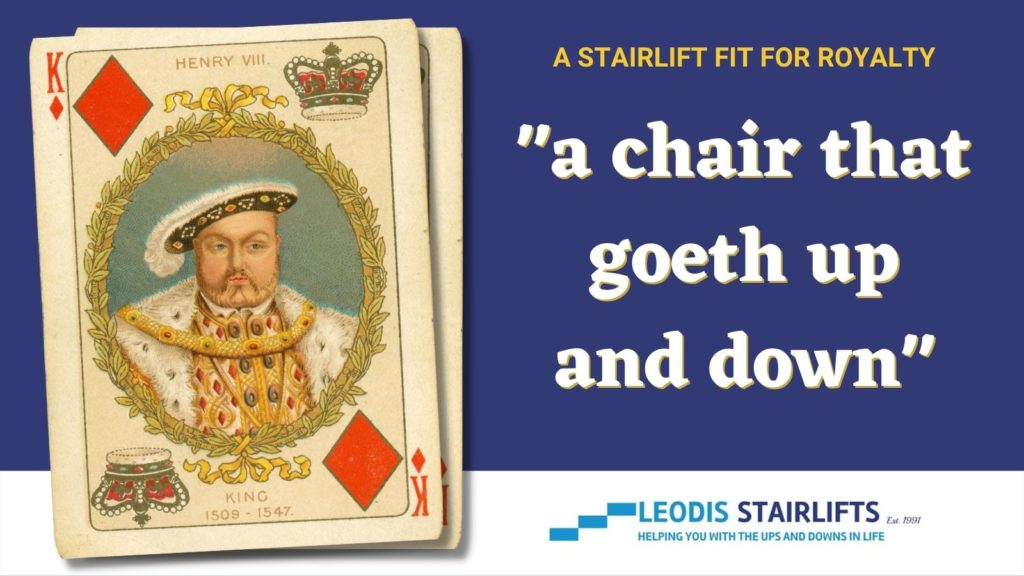 If you’ve recently had a stairlift installed for yourself or a family member you might be curious to know who invented the stairlift and when the first-ever stairlift was used.

We must admit, we didn’t realise how far back stairlifts went and knew nothing of its royal connection, until now (you really do learn something new every day!).

A stairlift fit for royalty

The first stairlift on record was invented way, way back in the 1500s and for none other than King Henry VIII.

Historian Dr. David Starkey made this surprising discovery in 2009 when going through an inventory which listed Henry VIII’s possessions.

One of those possessions was described as a ‘chair… that goeth up and down.’

It is understood that this ‘stairlift’ was created to carry Henry VIII up and down the 20 foot staircase in Whitehall Palace, London.

How did this stairlift work?

David Starkey believes that the first ever stairlift would have used a block and tackle system where servants would pull ropes to move the chair up and down the stairs.

Why did Henry VIII need a stairlift?

We initially jumped to the conclusion that the King would have required a stairlift due to his weight however there’s evidence to suggest this wasn’t the reason he needed help getting up and down the staircase.

Believe it or not, the King was very active in his youth and considered quite dashing!

Starkey has said. “He took an incredible amount of exercise, horse riding around 20 miles a day”.

Henry VIII actually suffered a nasty injury to his leg in a jousting accident in 1536 which left him practically immobile. It’s very likely this resulted in his weight gain and in turn left him struggling to get up and down the grand staircase in Whitehall Palace.

We’ll now not only remember Henry VIII for his 6 wives but also for his stairlift!

Who invented the first commercial stairlift?

Fast forward about 400 years to the 1920s when C.C Crispen invented what we would now recognise as a stair lift.

But this invention wasn’t called a stairlift back then, it was called the Inclinator and Crispen had invented it to help his ailing friend…

He came up with the idea after visiting said friend who had taken to living upstairs due to his illness.

Engineer, Crispin drew up plans for a folding wooden chair with a footrest which moved up and down a steel bar with the aid of rollers. This invention allowed his friend to come downstairs without the help of a carer.

This aid for his friend eventually became the Inclin-ator after a year in production and was available to view in a showroom for the first time in 1924. A few years later in 1928, Crispen went on to invent the first residential electric elevator to help people in homes with curved stairs.

In the 1930s, the Inclinator Company of America was born and the stairlifts they manufactured were mostly used by victims of polio.

Stairlifts have come a long way since Henry VIII’s rope and pulley!

Nowadays stairlifts feature everything from swivel seats to remote controls and seatbelts to ensure your journey up and down the stairs is safe and smooth.

We have stairlifts for both straight and curved stairs, and there are not many staircases we can’t work with (try us!)