Ageing In Place Together: Brenda and Bradley’s Story

The University of Bristol recently published a research article called “Ageing in Place Together: The Journey towards Adoption and Acceptance for Stairlifts in Multi-Resident Homes.”

The 26 page long document (hefty read!) contains some honest accounts from households who went through the process of getting a stairlift, which we hope you’ll enjoy reading.

These accounts mirror those we hear from our own customers at Leodis —the same reservations and emotions come up as they move forward into adoption or acceptance of these life-changing devices.

Brenda (58) had thyroid cancer and had to have a highly invasive operation to her spine that left her severely mobility impaired and prone to falling down the stairs. Her husband Bradley supports her mobility both inside and out of their home.

Considerable tension developed between Brenda and Bradley when deciding whether or not to get a stairlift….

Early in the decision-making process and after speaking to an Occupational Therapist about Brenda’s health, Bradley made a decision on her behalf to investigate how to get a stairlift installed.

Meanwhile, Bradley’s daughter and granddaughters decided to arrange a mobility assessment from an Occupational Therapist who came to their home.

Brenda ignored the OT when he arrived: “she was very rude…she wouldn’t speak to him and just kept watching TV but he was completely lovely and took it completely in his stride.” said Bradley.

“My daughters really wanted me to get it. I’d had a fall once and they couldn’t get a hold of me, so they bought me a new mobile. That was before they told me to get the lift!” said Brenda. 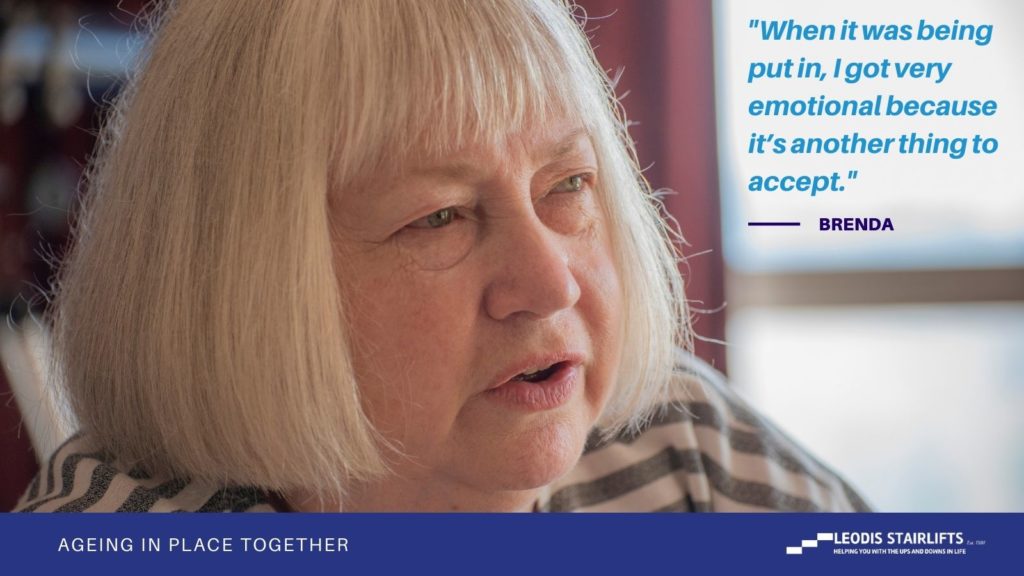 Brenda describes a situation where she sought out friends to find out more about the stairlift and to help guide her decision on it: “I was feeling very unsure about it so I spoke to our neighbours… they were very interested that I was getting one put in. They already had one put in. So I asked them what it’s like and they went ‘ooh, it’s so good Brenda, it’ll be a big help.’”

Brenda was visited by an Occupational Therapist in her home and also visited her local assessment centre.

She describes how initially: “It was difficult in the beginning, but I’ve grown to like him (her OT).”. As a result of this, Brenda eventually conceded: “I said I’d go to the assessment centre… but, only if my husband went with me.”

Despite Brenda’s initial agreement to attend the appointment at the centre, it was clear she wasn’t happy as soon as they arrived:  “When I first got there.. I did say I don’t think I need one. I’m quite alright to walk at this stage and I want to leave”.

Her husband disagreed with her because her recent spinal operation and her frequent falls, impacted on him too: “She likes to fall.. in the night. She’ll get up and sometimes I’ll hear a loud crash. Only the day before this appointment you fell again, didn’t you?” said Bradley.

However, the OT spoke further with Brenda and convinced her to stay for the rest of her appointment: “…he kind of knew that I wasn’t happy being there and having a stairlift.”

Brenda and Bradley then argued over the need for getting the stairlift in the assessment centre with the OT present: “She told me ‘I don’t need it, I can do without it.’ But I said back to her.. ‘just try’” said Bradley.

Brenda proceeded to walk up a small set of stairs which were built into the centre for their clients to use during assessments. After failing twice, the OT came over to her and said: “‘Okay, I’ve seen enough. I can’t force you to get one but you do need one’ at that stage, Brenda was in tears. And I knew that that meant she had surrendered to the idea. And there are advantages to being married for nearly 30 years.” laughed Bradley.

Brenda describes the day her stairlift was installed: “I found it very difficult looking at it. I got very emotional. When it was being put in, I got very emotional because it’s like it’s another thing to accept. That sounds strange but everything I’ve been through – it’s accepting what I can’t do any longer.”

Brenda described a cathartic moment when she recognised how her household dynamics could remain the same because of the installation: “After the installation my husband said ‘if you didn’t have the chair we would’ve had to have moved – and lost this house and gone to a bungalow’. I cried…I think my husband and children knew why. It was a relief honestly. It was the right decision.”

And Bradley and the family now have peace of mind too, “I don’t have to worry anymore that I’ll get a call from one of our kids, saying Brenda has fallen down the stairs.”.

If you feel now the time is right for yourself or a loved one to consider a stairlift, please give us a call today.